The specific issues that autism in women are often left out of conversations about autism and autistic adults. While the needs of adult autistic women do overlap with those of their male counterparts, they also face unique challenges that should not be left out of the larger conversation about adults with autism.

The gender ratio of autism diagnoses has been estimated as four or five boys to every one girl (2017), but it has also been hypothesized that autistic women are less likely to be diagnosed in general, contributing to the slanted ratio. New research has found that this ratio could be as low as three boys to every girl, supporting this hypothesis as well as emphasizing the need for more research. It was also found in a study conducted by Begeer et al. (2012) that girls and women who are diagnosed as being on the autism spectrum still tend to be diagnosed later than their male counterparts.

There are several hypotheses as to why autistic men outnumber autistic women so much, as explained in Male Slant to Research May Skew Autism’s Reported Sex Ratio. For example, it has been theorized that, due to gender differences in socialization, autistic girls are encouraged to act in ways that run counter to the traditional clinical presentation of autism, such as interacting more with peers (Happé, 2015). Many adult autistic women have also explained that imitating the behavior of peers around them is a common strategy used to fit in, but this strategy also has the effect of masking many signs of autism (Happé, 2015; Lai et al., 2015). Furthermore, the restricted interests of autistic women tend to be more socially acceptable, which can mean that they attract less attention from medical professionals.

Many autistic women must deal with several misdiagnoses in attempts to explain the issues that they deal with. Spectrum News’ feature on autistic women, The Lost Girls, by Apoorva Mandavilli, shares the story of Maya, a young woman with autism. Maya went through the process of receiving several different diagnoses that attempted to explain the issues that she faced but did not recognize that autism was the root cause. These misdiagnoses contributed to the difficulties, confusion, and numerous challenges that Maya faced as a young girl, an adolescent, and an adult woman. An exchange between Maya and a psychiatrist, summarized in the article, captures the issues that many autistic women face when trying to find the correct diagnosis:

Psychiatrist: Do you hear things that others don’t?
Maya: Yes. (Maya’s hearing is excellent.)

Psychiatrist: Do you think others are talking about you behind your back?
Maya: Yes. (Maya’s extended family is particularly gossipy.)

The wording of the questions asked by the psychiatrist can be interpreted in multiple ways, which ignores the challenges that many autistic people have in differentiating literal and figurative language. After this exchange, Maya was incorrectly diagnosed with paranoid personality disorder, illustrating how ignorance of the issues autistic women face can have serious impacts.

While looking at the misdiagnoses faced by autistic women, it is also necessary to consider the other mental health issues that they may face, especially compared to their neurotypical counterparts. With regard to depression and anxiety specifically, 34% of autistic women surveyed in Croen et al.’s 2015 study had been recorded as dealing with depression and 36% with an anxiety disorder. 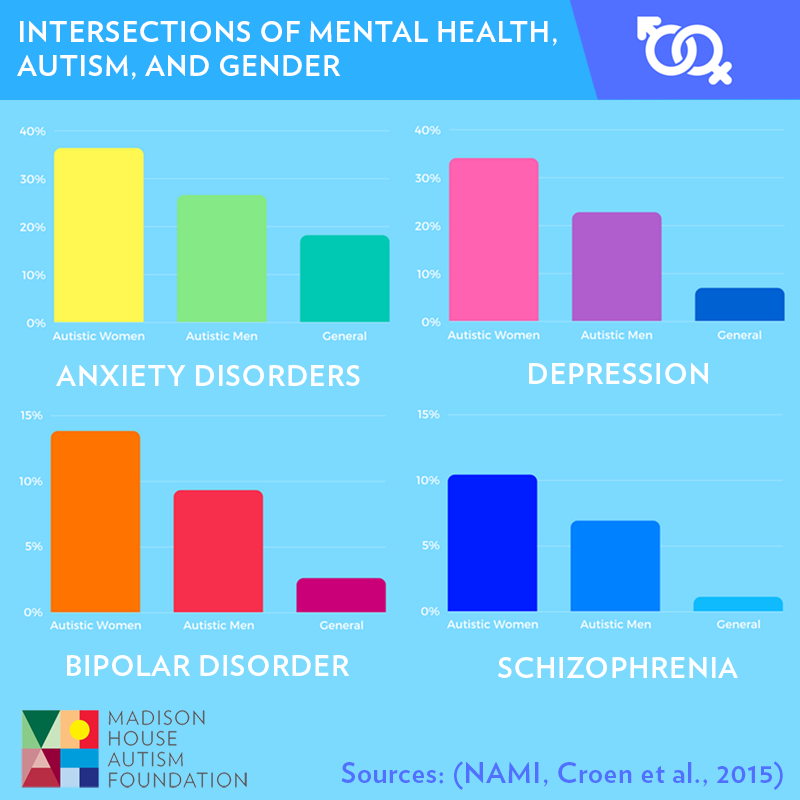 Eating disorders also seem to be a significant mental health issue among autistic women, much more so than men. Although there is little research about autistic women and eating disorders specifically, the research that has been published on this issue seems to imply that there is a significant relationship, as discussed in Girls with Autism May Stop Eating to Blunt Social Pain by Nancy Zucker. Zucker hypothesizes that, for autistic girls and women, anorexia becomes a way to maintain some sort of control over one’s personal environment, by rigidly restricting food. Similarly, although there is not much research on autistic adults and self-harming behavior, let alone women specifically, it seems that women may also be more likely to engage in self-harming behavior.

Sexual assault and abuse are issues that can affect anyone regardless of gender or ability, but impact women at very high rates, with RAINN estimating that “1 out of every 6 American women has been the victim of an attempted or completed rape in her lifetime”. Although there is little data available that is specifically about autistic women and rates of sexual assault, Bargiela, Steward, and Mandy (2016)’s study of the experiences of autistic women indicates that this is a serious issue for the women surveyed. Although the sample in this study was small, only surveying 14 women, 9 out of those 14 women reported past experiences of sexual abuse, especially in romantic relationships. Some of the participants explained that “their experiences of peer rejection left them ‘desperate’ for acceptance, which in turn made them more vulnerable to exploitation” and unhealthy relationships (Bargiela, Steward, and Mandy, 2016). It was also expressed that, while neurotypical female peers are able to share strategies and information about sexual assault, “young women with ASC reported feeling isolated as teenagers and so lacking a point of reference from which to develop strategies for staying safe.”

While sexual assault is never the victim’s fault, it is important to recognize how and why some populations may be more vulnerable than others and take steps to address these factors. Lack of education and social isolation are two significant factors that play a role in this issue, as hypothesized by the researchers. Although Bargiela, Steward, and Mandy’s study does not focus on finding solutions, the researchers do note that becoming more aware of others’ intentions and developing skills related to assertiveness were helpful for the autistic women surveyed in removing themselves from potentially dangerous situations. Resources and education aimed at autistic women, and autistic adults in general, must address the serious issue of sexual assault.

This article only looks at a very narrow scope of issues faced by autistic women, but there are many challenges faced by women with autism that need a spotlight to be shined on them as well. For example, there are few resources available for autistic mothers and the unique challenges that motherhood can bring. In contrast to the ample resources available for (assumed neurotypical) parents of autistic children, there is little information available specifically for autistic parents. Motherhood: Autistic Parenting by Cynthia Kim, on Autism Women’s Network, highlights the often-ignored challenges that mothers with autism face, noting some possible ways to address these obstacles.

The numerous challenges that autistic girls and women face, especially in adulthood, must be addressed. Women with autism may make up a minority of people with autism, but this does not mean that they deserve lesser resources or care.

Amaze. Girls and women on the Autism Spectrum. Retrieved May 1, 2017.