Starting Down the Pathway to College

You are here: Home / Serial / Jason's Journey / Starting Down the Pathway to College

Last night marked Jason’s fourth week in the Pathway Program and I’m encouraged by what I’ve seen thus far. After a somewhat shaky start (more about that in a minute), he’s buckled down and begun to get used to a whole new routine.

First, some background on the program. Offered by BYU-Idaho, the program is designed for three different groups of aspiring college students–those who are academically challenged and need a little boost to get them ready for college work; those who need to put their lives in order to be ready to abide by BYU’s strict moral code; and those, like Jason, who may have difficulties or learning disorders that prevent them from being at ease leaving home for college. 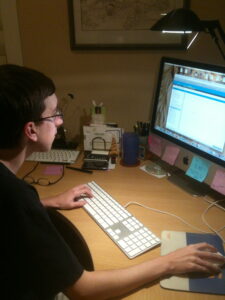 The program is simple. Jason takes two courses a semester (an online course that provides reading materials, study guides, writing prompts and weekly quizzes . . . and a second course on Thursday nights in a classroom at the local LDS Institute). Following the second course, he gathers with the Pathway Director and the other classmates to discuss what they’ve learned online that week. All told, Thursday nights are pretty long–about 3 hours in class. But the rest of the week, the load is really quite light. This semester, Jason is taking a religion class and a course entitled “Pathway Life Skills.” Perfect for someone like my son.

I say that because it’s teaching him the true value of a college education and how it will affect his life and prepare him to serve himself, his family, and his community. In other words, it’s drawing him out to engage with the world he lives in. Exactly what he needs!

As I alluded to above, Jason’s first Thursday night class didn’t go so well back in September. But that was because there wasn’t clear communication about the schedule for the evening. After one and a half hours of the religion class, he was maxed out and rushed out of there before they even announced that a Pathway class would directly follow. Jason doesn’t drive yet, so my husband was waiting in the parking lot. When he got in the car and insisted the class was over, Michael thought it a bit strange but began to bring him home. Not ten minutes later, I got a call from the Pathway teacher’s wife (fortunately, a couple runs the program) asking where Jason had gone. After a quick call to my husband, they turned around and Jason, rather humiliated, slumped back into the classroom and hid in a corner for the rest of the evening. Needless to say, he didn’t get much out of that first class.

I thought we might have a problem getting him to agree to return the next week, but after a bit of coaxing and helping him with that first week of assignments, he went. Now, after three weeks, the routine is set. He checks his email regularly. He logs in for his assignments, does his reading, goes through the study guides, completes his Learning and Attendance Reports, takes his quiz, and prepares for the next Thursday evening class.

Once he completes three semesters of the Pathway Program satisfactorily, he’ll be admitted to BYU-Idaho as a full-fledged online student and be able to pursue one of nine different Bachelor’s degrees or five different Associate’s degrees (and those are only the degrees they’re currently offering . . . by the time he’s accepted, I imagine they’ll have more).

I can almost see my son’s future opening up! Now if we can only get him to take Driver’s Ed. Patience, I remind myself. At least he’s begun to be open to the idea of driving.

Our New Logo
Next Post: Autistic. Artistic. A Life Ahead.