A Possible Career for Jason

You are here: Home / Serial / Jason's Journey / A Possible Career for Jason

A couple of weeks ago, I wasn’t surprised to see that Jason’s homework assignments all revolved around exploring his own preferences in terms of interests and possible careers. He took three different tests online, one of which I immediately recognized as a version of the Myers-Brigg Personality Indicator test.

You know the one. It asks you to choose your preference in various situations and it’s designed to discover whether you’re introverted or extroverted, intuitive or sensing, thinking or feeling, and perceptive or judging . . . or something like that. I recalled that when I took it, I ended up being an INFJ (introverted, intuitive, feeling, and judging). So I was curious to see where my son would end up on this other man-made “spectrum.”

I decided to watch and say nothing as he answered the various questions, though more than a few times as he answered, I had to bite my tongue because that wasn’t how I saw him at all. In fact, I got to wondering how accurate this test could be for someone who has a hard time stepping outside of himself enough to judge how different circumstances truly affect him. His first result: ISTJ.

He went on to take the other two shorter tests and then let the computer spit out the jobs that seemed a good fit. There was only one–some kind of housing inspector. Jason and I looked at that and then at each other and said, “What?”

I guess I shouldn’t have been surprised. After all, when I took one of these kinds of tests in college, I was told I was most suited to be either a Priest or a Rabbi.

Anyway, I encouraged him to take the personality test again and this time I prompted him a bit based on what I knew of my son. This second time around, he turned out to be INTJ and two main careers were suggested:

Desktop Publishing or Library Science. Both were a much better fit. Of the two, he said he’d prefer working in a Library.

I was happy to discover later, in a blog posting about careers suited to those with Asperger’s, that Library Science can be a good fit for Aspies.

In any case, based on those results, he’s begun to lay the groundwork for his college courses, with an eye toward earning either a Bachelor of Science degree in Interdisciplinary Studies (which can all be done online) or a Bachelor of Science degree in University Studies (which requires some courses toward the end in residence). In either case, he’s thinking he’ll focus on the areas of English, Communications, and Literature.

Finally, a glimmer of a plan for his future. YES!

And how ironic it is that most of his senior pictures for high school were taken in our local library. Here’s one of my favorites: 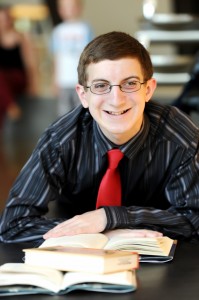 Now my only concern is: With the rise of e-books, is the future of libraries in jeopardy? How will libraries change in the next five years, and will it still be a good fit for my son by the time he graduates?