You are here: Home / About Us / Leadership / Dr. Daniel Fairbanks 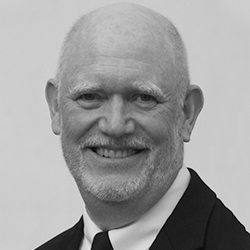 Daniel Fairbanks is an accomplished scientist, artist, author, and teacher. He currently is Dean of Science & Health at Utah Valley University, and has been a professor at the University of Massachusetts–Amherst, Southern Virginia University, Brigham Young University, and Fulbright Professor at the Universidade Estadual de Londrina in Brazil. He is a geneticist with a wide breadth of expertise in evolutionary genetics, international scientific development, science education, and the history of genetics. His most recent book is Everyone Is African, published in 2015 by Prometheus Books. Other books include Evolving: The Human Effect and Why It Matters (Prometheus Books), Ending the Mendel-Fisher Controversy (University of Pittsburgh Press, with A. Franklin, A.W.F. Edwards, D.L. Hartl, and T. Seidenfeld), Relics of Eden: The Powerful Evidence of Evolution in Human DNA (Prometheus Books), and Genetics: The Continuity of Life (Brooks/Cole-Wadsworth, with W.R. Andersen). His research articles have appeared in a wide variety of journals, among them Genetics, BMC Evolutionary Biology, Genome, Theoretical and Applied Genetics, Evolution: Education and Outreach, and Science Education. He is among the leading authorities on the history of genetics, specializing on the legacies connecting Gregor Mendel, Charles Darwin, and Ronald Fisher.

Having been raised in a family of four generations of artists, Daniel is also a professional artist with commissioned work in sculpture, painting, and drawing on permanent exhibit in museum, public, and private collections in the United States, Europe, and Latin America, and published book illustrations. His latest book, Evolving, is lavishly illustrated with his hand-drawn and computer-generated images. As a sculptor, he apprenticed in Italy in the studios of Franco Cervietti and Guiseppe Giannoni, and studied with renowned American sculptors Tuck Langland, David Klass, and Avard Fairbanks (grandfather). His diverse talents in art and science merge through artistic human anatomy, scientific illustration, and forensic sculpture. He studied sculptural facial reconstruction at the Brookgreen Center for American Sculpture with Roy Paschal, and is currently working on anthropological facial reconstructions of skulls from Moche excavations in Peru with anthropologist Haagen Klaus. Dr. Fairbanks uses his skills as an artist to promote scientific awareness and education through sculpture demonstration lectures highlighting science at universities, museums, and other public venues, among them Yale, Villanova, University of Colorado, University of Utah, and the University of Massachusetts.