You are here: Home / About Us / Leadership / David Cooper 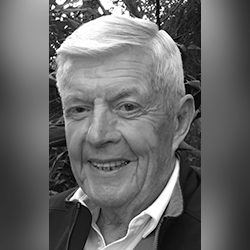 Dave Cooper graduated from the United States Naval Academy in 1957 and started a twenty-seven-year career in the Navy. After earning a masters degree in electrical engineering at the US Naval Postgraduate School in 1964, he was selected for nuclear power and submarine duty. Dave commanded a nuclear attack submarine in Hawaii for four years and subsequently, for two years, commanded the largest squadron of operating nuclear submarines in the Atlantic fleet.

After retiring from the Navy as a Captain, Dave was employed by TRW for ten years as a program manager. Fully retired, he served on the Board of Directors of the United Way of Greater Washington. Dave has been active in his Episcopal church, serving on the vestry for five years and as treasurer of the church for ten years. For five years he served as the Executive Director of the Rainbow Therapeutic Riding Center in Haymarket, Virginia. He has been president or vice-president of his Naval Academy class for the last fifteen years and is currently on the Board of Directors of the US Naval Academy Alumni Association.